One of the world’s greatest singersongwriters over the last 60 years, Neil Diamond is the master of the pop tune, and now Showtime Australia and Zac Coombs have teamed up to recreate all his beloved hits and career highlights on stage. The Sweet Caroline Tour: A Tribute to Neil Diamond is scheduled to debut at Puta¯ruru’s The Plaza Theatre on Saturday, May 15 — and we have a double pass for you to win. The show will be one of the first international acts to breathe life back into New Zealand theatres again since pandemic travel restrictions were first put in place a year ago, with a total of 25 venues from as far north as Kerikeri and as far south as Invercargill on the schedule. Young but accomplished Australian musician and performer Zac Coombs is certain to be the highlight – his portrayal of Diamond’s unique voice is uncanny, his love of the songs is obvious in every performance, and every story told carries that nostalgic Diamond lilt. “Audiences will be floored when they hear him. Not many artists can pull off Neil Diamond, his voice and character is so unique, but Zac has fully thrown himself into this role and the results will speak for themselves. His vocals have been mistaken for the real Neil Diamond on more than one occasion,” says producer and director Johnny Van Grinsven. Aside from the artistry of Zac, audiences can expect customdesigned concert production and a live support band to round out the two-hour theatre experience. The set list is a veritable soundtrack of the past 60 years, featuring tracks that have been played countlessly on records, in concert, on the radio and in movies, and some that are still chanted in the biggest sports arenas in the world today. A much-needed chance to step back to the glory days of real music and musicianship, this show will delight all true music lovers. Tickets are on sale now from eventfinda.co.nz — for groups of 20 or more email sales@showtime.net.au for a quote. 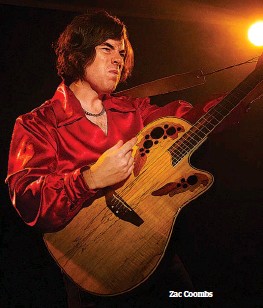