Aweek out from opening night May 6, The Book Club — a play by Sir Roger Hall — is promising that audiences will be really intrigued as the sole actor Deb (Michelle Walker), a “bookaholic”, takes them on a journey from being an “empty nester” to something better (she hopes). On the way she introduces all the people in her life starting with husband Wally, a “sportaholic”, her grown up family, the members of her book club and Michael — an author who lives in the same city. The “word pictures” Deb uses to describe each make them seem so real, particularly Wally and Michael (there’s a hint as to the plot), but since her views of them change the audience is always curious as to how they will be portrayed next. That is the genius of the author. Interspersed amongst the description of her journey are observations and questions about heavy topics like grief and guilt, desire and reputation, infidelity and duty, some of these linked as cause and effect. This is all done with wit which creates a steady chuckle and the not infrequent outright laugh when people act both true to character and out of character. The play is in two parts — setting the scene in Act One when you meet the characters and the dramatic results of having her dream come true in Act Two. The narrative — strange as it may seem — gets a bit raunchy at times but not so raunchy as to upset. It is narrative remember. The set is Deb’s lounge which extends into the auditorium to include the audience. Deb leaves the room just once briefly, but the audience travels virtually from Remuera all over Auckland to Omaha and Taupo. The role of Deb is possibly one of the most challenging for any actor — an hour and a half of narrative, constantly changing topics and characters with just a tiny bell and some linking music to keep her on track. Michelle Walker as Deb meets this challenge brilliantly. Her use of the set and her switch of focus to different parts of the audience, change of tone and posture all combining to leave the audience in no doubt about whom she is describing. Director Josie Robertson, who played the role of Deb in 2015 in the Carnegie Building, has fashioned a different show, helped by some recent rewrites of sections of the play . It is a very entertaining night and well worth a visit to one of the seven shows in the Fountain Theatre. The show opens on Thursday, May 6, running each night until May 8, repeating in the next week May 13-15 with a matinee at 2pm on the Saturday as well as final night. Tickets from the Dannevirke Information Centre. 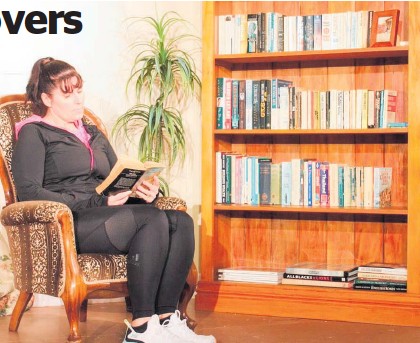